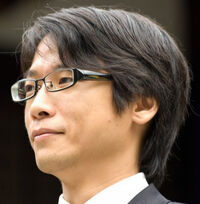 Yutaka Yamamoto is the main writer, and sole director of Fractale. He was born on September 1, 1974 in Osaka, Japan.

He is well-known for his work on anime series, such as The Melancholy of Haruhi Suzumiya (which he became especially well known for because he choreographed the ending dance). He was also the director for Lucky Star and Kannagi.

Retrieved from "https://fractale.fandom.com/wiki/Yutaka_Yamamoto?oldid=3960"
Community content is available under CC-BY-SA unless otherwise noted.