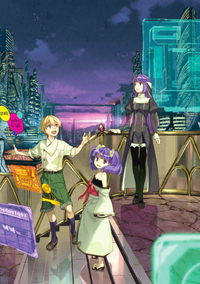 Fractale is an eleven-episode Japanese anime series. It is written and directed by Yutaka Yamamoto. Funimation will release the series in 2012 on DVD and Blu-ray.

In a far distant future, humanity has embraced the Fractale system as the ultimate path towards utopia. Made up of several trillion networked computers, Fractale was created in the 22nd century to promote a peaceful lifestyle for the entire world in exchange of a periodic recovery of personal data from individuals through terminals located within their bodies. Living in a rocky coast region (certain scenes are taken directly from Galway, a city in the west of Ireland), Clain is a young boy fascinated by old technology. After helping a girl named Phryne, she gives him a pendant before disappearing the next morning. Accessing the data from the strange gift, Clain ends up summoning a girl-shaped avatar named Nessa. Together they start a journey as they discover the truth behind the Fractale system.

There was also a manga adaptation of Fractale in Gangan Online magazine from September 30, 2010 to November 17, 2011.

Retrieved from "https://fractale.fandom.com/wiki/Fractale?oldid=4253"
Community content is available under CC-BY-SA unless otherwise noted.